skip to main | skip to sidebar

This conference aims to explore and analyse the issues relevant to
Sindh an Sindhi people in the backdrop of changing policy and political
scenarios in Pakistan, the region and the world as a whole. The
conference aims to address the following issues:

· Violation of human rights, and the safety and security of
political activists and journalists in Pakistan

· State of democracy and role of military in Pakistan

About The World Sindhi Congress (WSC): WSC is based in the UK,
USA, Canada, and Sindh and is one of the most prominent human
rights advocacy organizations for Sindh and Sindhis. The main
objective of WSC is to create a better understanding within the
international community about the persecuted status of Sindhis in
Pakistan and about the Sindhi people’s struggle for human rights,
including the right to self-determination. WSC is a registered
company in the UK and the state of California, USA, and is
organized to carry out non-profit activities. For more
information, visit http://www.worldsin dhicongress. org

The occasion was attended by Sindhis from all over UK, Balouchs and many others.

Programme Chair, Dr Hidayat Bhutto welcomed and thanked the participants, who came from far-flung areas to attend the event.

Speaking on the occasion, Mr Munir Hyder Shah, the great grandson of saeen G.M. Sayed said that Sayed sacrificed his very existence to serve Sindh. “There is no doubt that Saeen belonged to the illustrious category of great Sindhi martyrs, like Raja Dahar, Sayed Sabghatullah Shah Soorehu Badshah and shaheed Allah Bux Soomro”. He said whatever Sayed predicted has proven true. Now all the parties are speaking about more powers to the provinces. He said Sayed’s love of Sindh was phenomenal. His only priority in life was Sindh, her institutions, the people, the language and culture

WSC Chairman, Dr Haleem Bhatti presented a brief account of Sayed life and contributions. He said Sayed started his political career at a very young age. The focus of his politics and indeed entire life was Sindh. He fought for and achieved Sindh’s separation from Bombay Presidency. He moved the Pakistan Resolution in Sindh Assembly, but when he saw that joining Pakistan was not in the interests of Sindh, he started campaigning against that union right since 1946. He stood for the right of self-determination of Sindh right until his last breathe.

Dr Haleem also spoke about Sayed’s literary contributions, the books Sayed wrote on different subjects. He said Saeen G. M. Sayed faced all the troubles because of his ideology and his love for the land of Sindh, Sindhi people and Sindhi language and culture. Being an embodiment of Sindhi thought and culture, Saeen G M Sayed has preached the principles of Sufism, love, tolerance and non-violence.

Concluding his tribute Dr Bhatti said Sindhis will always remember their great leader. He said, “G.M. Sayed died in the unfortunate land of his love but he will live in the hearts of every one forever, who calls himself a Sindhi”.

Ms Suraiya Makhdoom, Senior Vice Chair, WSC, who moderated the Session, paid glowing tributes to the great leader. She said Sayed started his political career at such a young age that he had to stand on the table to deliver speeches. The then British establishment took notice of his anti imperialist stance. But nothing would deter Sayed fight against imperialism and for the freedom of Sindh. Sayed served Sindh in very respect, political, social and language and literature.

Ms Makhdoom thanked Balouchistan Chief Minister, Nawab Alsam Raisani for his solidarity with Dr Safdar Sarki, the ex Chairman of WSC, by sending Dr Sarki a bouquet of flowers and providing him medical and other humane facilities in prison, which were denied to him. She asked the Sindh CM and the government to reciprocate the favour and allow same facilities to Akhtar Mengal, who is in prison in Sindh.
Mir Ghulam Hussain of Balouchistan Action Committee said that we pay tribute to Sayed for spending his whole life behind bars and under house arrest, but never compromising on the principles. He said Sayed’s mission could only be fulfilled by actions and not the words. He urged upon Sindhi and Balouch mothers and sisters to come forward and join in the struggle. He concluded his tribute by asserting that freedom is the only way forward for the people of Sindh and Balouchistan.
Mr Sujan Sindhi said that G.M. Sayed was the first political prisoner in Pakistan. He said Sindh remained the focus of Sayed’s entire life and for his beloved country prepared to offer any sacrifice. He said Sayed work had a great spiritual aspect. He said we could only gain something if we are prepared to sacrifice.

Samad Balouch of Balouchistan Action Committee said Sayed we should fulfil Saeen’s mission by fighting for the genuine rights of the oppressed people of Sindh and Balouchistan. He mentioned the martyrdoms of Nawab Akbar Khan Bugti and Mir Balaach Marri, who sacrificed their lives for the cause of their land and people

Abdul Jabbar Qureshi, President Sindhi Sangat UK, said we should follow in the footsteps of Saeen G.M. Sayed and commit ourselves to cause of Sindh.

Concluding the speeches session, Dr Lakhu Lohana, General Secretary of WSC, said the best way to pay tribute to Saeen G.M. Sayed is to fight for the rights of Sindh on all fronts. He spoke at length on the current situation. He said we are being alienated in our own cities, especially in Karachi. He said the previous MQM led government in Sindh passed a law, which prohibited Sindhi from outside Karachi from applying for the jobs in the NGO and other agencies in Karachi. Sindhis are living in apartheid conditions in their own country.

The doors of educational institutions in Karachi have been shut to Sindhis domiciled in other towns and villages of Sindh. The MQM led Sindh government shut down many Sindhi medium schools and the whole of the Sindh Assembly remained silent witnesses. Dr Lakhu said we got to struggle for our survival as a nation

The speeches session was followed by the Sufi music programme, in which Harbans Singh and his group sang the inspirational sufi and national poetry of Shah Abdul Latif and other poets.

A sumptuous dinner concluded the programme. 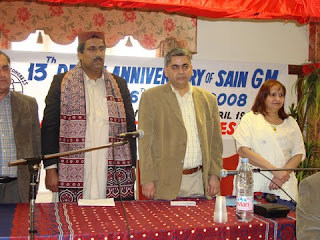 Posted by sattar@columnis.com at 7:51 PM 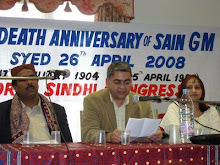 Dr Haleem Bhatti Suriya Makdoom and others in Event 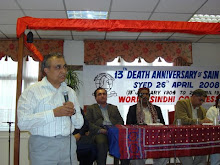 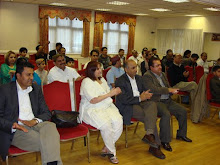